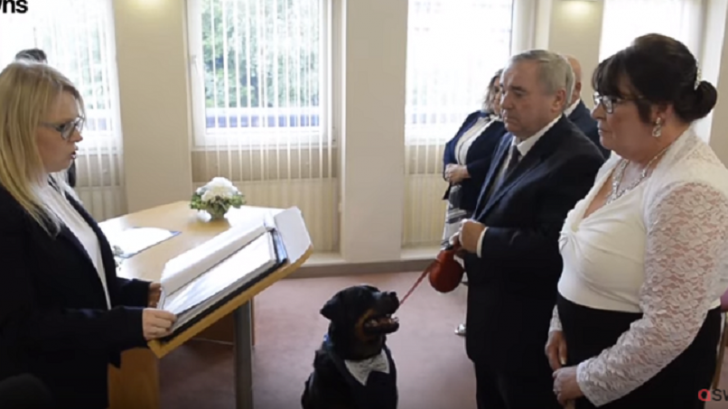 When 69-year old Christopher McCarron lost his son, he went to Dog’s Trust centre in West Calder, Scotland and found Jack. Jack was a former guard dog and well, they immediately hit it off. And while taking his new furry friend out for a walk, he bumped into 56-year old Margaret Allison.

Obviously, Jack had a hand (or paw) in their love story. Besides, it was one of the things that brought the couple together – their mutual love for dogs.

And when they decided to get married, Christopher knew he didn’t have to look far for his best man. He knew that the role would fit Jack perfectly. And so on his wedding day, the six-year-old Rottweiler simply wore a wee tuxedo on this collar and he was good to go.

“I wouldn’t have considered getting a rescue dog because of his age, he’s around six. But when he went up to me, we just clicked. Little did I know that I’d meet my future wife at the rescue center too.

“When we decided to get married, Jack had to be there. We had a lovely sentimental day, and Jack played a big part. He loved it, he really did.”

Even Allison was more than thrilled for Jack to fulfill his role as best man.

“When Chris said ‘I do’, Jack sneezed, as if to say ‘I do too’. He was a star, he posed for all the pictures. The registrar said it was the first time he’d seen a dog being the best man. We did think about Jack carrying a cushion with a ring. He had his wee tuxedo on but he went in the garden and got a bit mucky.”

The couple treats Jack as part of the family. And Christopher says his life was never the same when Jack came along.

“I don’t believe that I rescued Jack, I think he rescued me.”

Awwww, Jack is such a good, good boy.