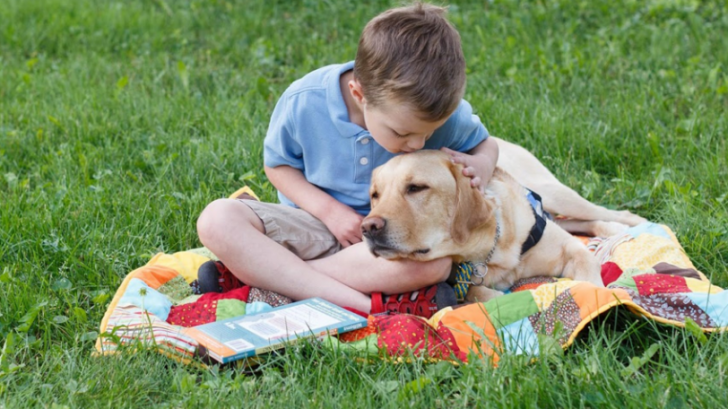 It Will Melt Your Heart

Back in 2014, then-2 year old Gavin Swearingen fell from a swing in their home and suffered from traumatic brain injury. He was airlifted to Riley Hospital for Children for treatment. According to his mother Amanda:

“He hit his head and they found he had suffered a large traumatic brain injury and so they took him by Lifeline to Riley downtown and did emergency craniotomy. They take the skull off and leave it off – in his case, for a couple of weeks – to let pressure go down and then they put it back on and he’s been in recovery ever since.

“He hit his head just right. And, suffered a massive head trauma. He was completely paralyzed on the right side. He had to re-learn how to walk, talk and eat. This was life-changing for all of us.”

Fast forward to 2019, it hasn’t been easy for 7-year old Gavin. He has developed epilepsy, hemiplegic cerebral palsy, and even had several strokes. In 2018, he met his first service dog – a Labrador-golden retriever mixed breed named Elmer. It was trained by the nonprofit Canine Companions for Independence. And ever since Elmer came into his life, things were never the same.

“It’s magic. I jokingly say they’re both puppies — they love to play. Gavin is 7 and Elmer is 2. They run and chase each other and they’re silly.”

Aside from helping with Gavin’s gait, Elmer also helps him navigate in crowds. And even during physical therapy, he makes it more fun for the little boy. Before he got the dog, Gavin had a bit of a hard time reading. But with Elmer, his reading level is better and he reads books for his furry friend every single day.

Elmer’s arrival is also timely because he’s been helping Gavin not just at home but more importantly during his hospital visits. Gavin finally found the best friend he can rely on.

“When I’m at the doctor he’s going to be there to protect me. He’ll be there the whole time.”