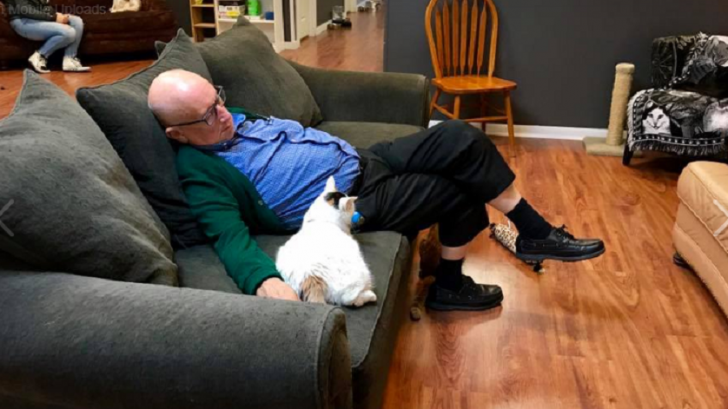 At the Safe Haven Pet Sanctuary in Green Bay, Wisconsin, there’s a 75-year old volunteer who’s stealing everyone’s hearts. Early in 2018, the retired Spanish teacher walked up to the shelter, introduced himself as Terry Lauerman, and asked about volunteering by brushing cats. Six months later, he became an internet hero.

According to Founder Elizabeth Feldhausen:

“He just walked in with his own brush, and started brushing cats.”

Terry treats the cats like his old friends – he knows all their names, can tell their likes and dislikes, and more importantly, he has spent time with every single feline in the sanctuary. But since the place has massive and comfortable couches, it’s often unavoidable for Terry to fall asleep with the cats beside him. And photos of him napping with a different cat snuggling up to him each time have gone viral.

“Terry sleeps on accident like … every single day here. The cats love when he falls asleep, they always steal his body heat and sleep with him. I think he makes them feel safe.” – Elizabeth Feldhausen

When the photos came out, people helped the shelter by donating funds and the amount was enough to cover Safe Haven for a year. As for Terry, he seemed unfazed by all the attention he’s getting.

“I still don’t think he really realizes how big of a deal this is. He just says he’s happy with whatever makes money for the cats.”

One of the photos where he was photographed with his favorite cat Louis with the adorable furry feline outstretching its paw across Terry’s leg melted hearts everywhere. And it also helped Louis get adopted.

“All of the cats need a safe place where they can recover. That’s what I enjoy doing, trying to get them as healthy as they can be and available for adoption.” – Terry Lauerman

Check out the photos.