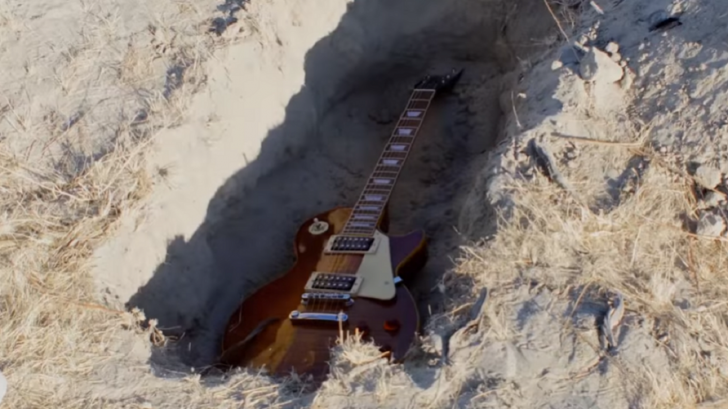 Warning – if you’re a guitar enthusiast, this might give you major anxiety.

So this guy from YouTube channel Guitar MAX did a little experiment. He wanted to know if his electric guitar would survive after being buried in the desert for a whole month. He starts it off by saying that he’s always “felt that guitars are a lot more durable than people give them credit for.” And of course, he wanted to test out that theory by heading out into “the middle of nowhere” with his shovel and then finding a good spot to bury his Les Paul.

His plan is “to dig it up one month from now and see if it still plays and works as it should.” By the way, he opted to use a Les Paul because he wanted it to “be an authentic test.”

And of course, he takes it out of its case to put it in the dirt. So, how is he gonna find it? He added a guitar cable and let it stick a bit.

What does he expect to find after a month? He says, “I think the guitar is gonna be pretty much okay other than just having a lot of dirt on it. So I think I can sort of shake and brush off the dirt, plug in the guitar, and it’s still gonna work.”

Watch the video below.