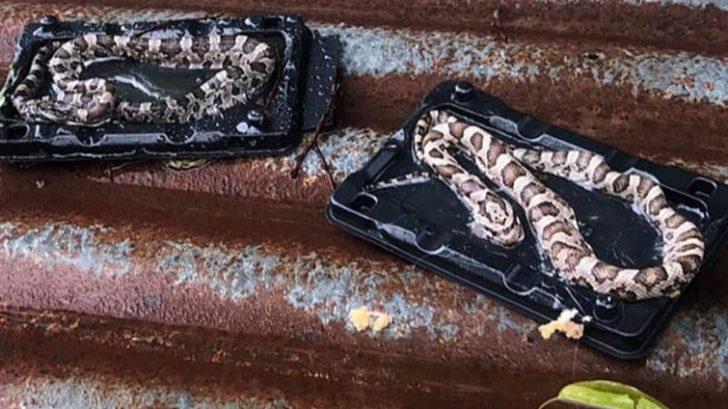 A family from Texas put sticky mouse traps around their house, expecting to find at least one little mouse. Instead, they found a nightmarish surprise when they saw several rat snakes stuck on the glue instead.

Danny Brown of Greenville, Texas revealed that so far, he’s found about six snakes in his property. Their house is fairly new so he’s baffled as to where all the snakes are coming from. And though it’s not what they originally intended, they continue to put mouse traps for the snakes this time. Brown said, “We have sticky traps everywhere now. Sticky traps work very well for catching snakes alive.”

He also posted on Facebook, “Now it’s really getting scary. That’s an indication that a snake nest might be close by or even in our house.”

He and his wife Mary Jane initially thought they were copperheads but people on social media pointed out that they’re “harmless rat snakes” according to The Charlotte Observer.

“I sealed my house extremely tight, so I don’t know how they got in here,” he added. “I have looked and looked for their entrance but don’t find it.”

That alone is scary but in one video Brown posted, it showed a snake that somehow successfully separated itself from the glue using a sheet of paper. Yikes!