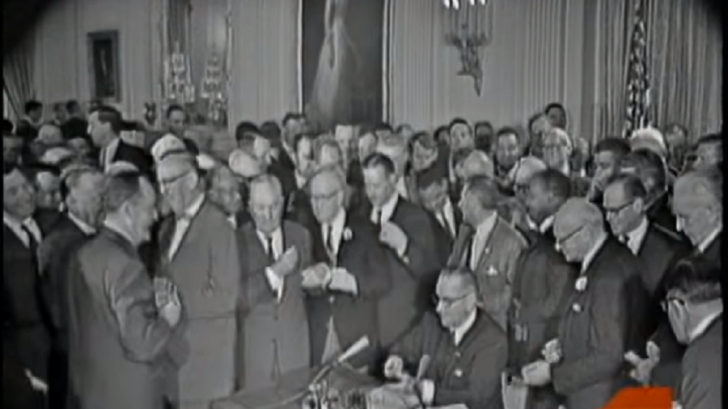 The 1960s had its share of ups and downs, highs and lows. It was marred by protests, fights for injustice, the Vietnam War, and the assassinations of John F. Kennedy and Martin Luther King. On the other hand, there was also the Summer of Love and the rise of rock ‘n roll.

Let’s look back at some of these historical moments.

A move to eliminate inequality, this act was proposed by President John F. Kennedy. It prohibits any form of segregation at school, at work, or any public facilities based on race. It also banned discrimination based on sex, color, religion, race, and national origin.

This fictional superhero made his debut on the comic book Amazing Fantasy #15 which was released on August 1962.

On December 3, 1967, surgeon Christiaan Barnard led a medical team to perform the first human to human heart transplant in the world. The operation was done at Groote Schuur Hospital in Cape Town, South Africa.

7. First men arrived on the moon

On October 1962, there was a 13-day political and military standoff between the United States and the Soviet Union after nuclear-armed Soviet missiles were discovered in Cuba. This was so tense that people thought it could escalate into a nuclear war.

On August 5, 1962, pop culture icon Marilyn Monroe died due to a barbiturate overdose. She was only 36 years old.

On November 22, 1963, JFK was assassinated during a political trip in Dallas, Texas. He was shot during a presidential motorcade.

Civil rights activist Martin Luther King was known for leading nonviolent protests. He was killed on April 4, 1968 by James Earl Ray as he stood on the second-floor balcony of Lorraine Motel.

Although it began in the 1950s, the Vietnam War escalated in the ’60s. The conflict was between North and South Vietnam. It lasted for almost two decades.

2. The rise of Muhammad Ali

Muhammad Ali, also known as Cassius Clay, was only 18 years old when he bagged the gold medal in the light heavyweight division during the Summer Olympics in 1960.

Held between August 15–18, 1969, it was legendary for many reasons – the number of attendees, the general peace during the entire event, and the iconic lineup. It was a pivotal moment in rock ‘n roll and the counterculture generation.