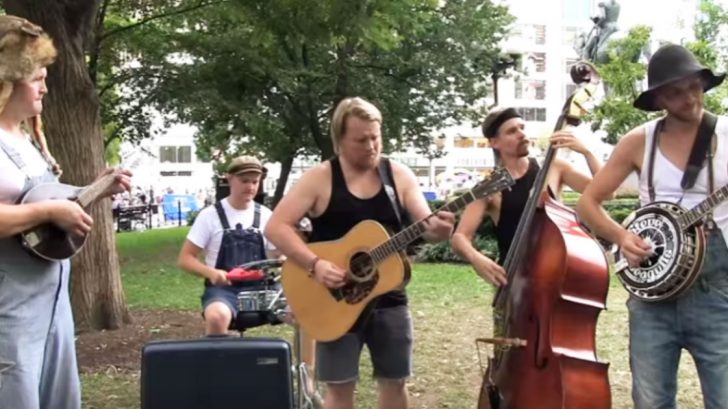 If you’re looking for the title “Black Dog” in the lyrics, it’s not there simply because it has absolutely nothing to do with the song itself. When Led Zeppelin couldn’t find a good title for this track, they remembered the black Labrador that they used to wander around the woods back in Hampshire, England. They would often feed this black dog too. Sometimes it’s really interesting as to how bands come up with names for their songs.

John Paul Jones, who is credited with writing the main riff, wanted to write a song with a winding riff and complex rhythm changes that people could not “groove” or dance to.

This was the opening track for the band’s fourth studio album “Led Zeppelin IV.” During Steve ‘N’ Seagulls’ (Finnish country band) visit to the US, they performed this song at the Union Square Park in New York. They’re well known for playing their bluegrass version of various popular rock and heavy metal songs. This one’s a tight version of the Led Zeppelin classic.

Built around a call-and-response dynamic between the vocalist and band, “”Black Dog”‘s start and stop a cappella verses were inspired by Fleetwood Mac’s 1969 song “Oh Well.”

Great version of a great song! It’s not easy to take a huge hit and create an original, unique version let alone bluegrass style. This is just proof of their creativity and talent. It’s almost like they can convert any song into a bluegrass hit, the way they arrange the instruments and sound.