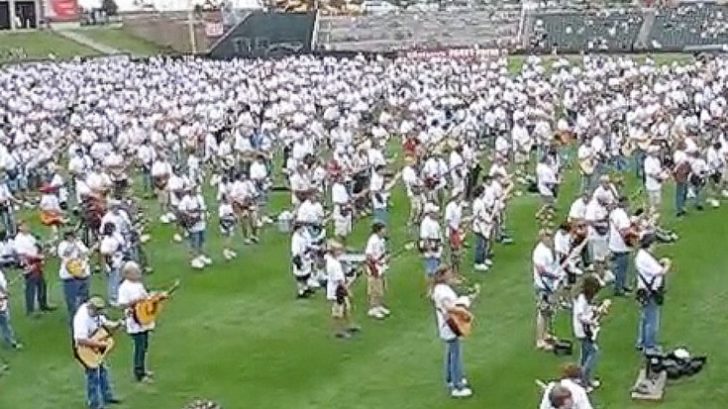 In 2007, over 1,600 rock fans converged on Kansas City, Kansas’ Community America Ballpark with one goal in mind: to use the power of rock and roll to crush a record set back in 1994. This wasn’t just any old record, not by a long shot; thanks to local radio station host Tanna Guthrie, the name of the game became to shatter the world record for the most people playing the same song simultaneously, hopefully eclipsing the 1,323 people who set the record with Deep Purple’s “Smoke On the Water” in 1994 in Vancouver, British Columbia.

They got their wish: approximately 1,683 people from all walks of life – grade schoolers to grandparents, novices and experts alike – showed up at Community America Ballpark dressed in white shirts and blue jeans, armed with guitars of every kind to crush the previously held record by playing the unforgettable opening riff to “Smoke On the Water” for five minutes straight. Because this is the kinda thing you’ve got to see to believe, check out the moment they set the new world record (until 2015, that is) in the video below!