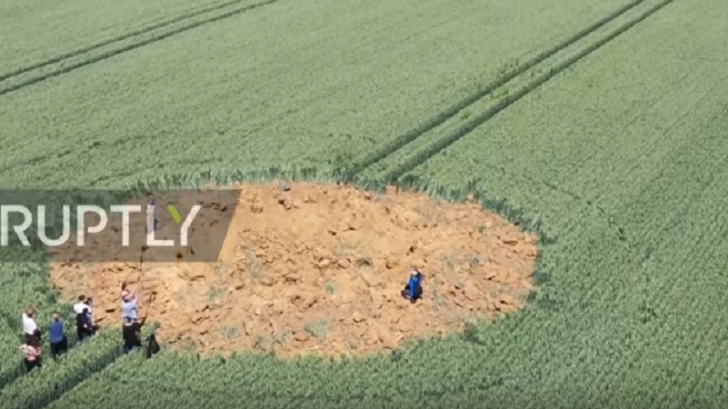 The Crater It Left Was Massive

Over seven decades after the World War II and there are still over a thousand tons of unexploded munitions being discovered in Germany every year – think 1,000 to 2,000 tons. In 2010, a 1,000-pound bomb exploded in a Göttingen flea market. In 2011, 45,000 people were evacuated while bomb technicians defused a “Blockbuster” bomb in Koblenz. In 2013, 20,000 people also had to flee their homes in Dortmund after another 4,000-pound “Blockbuster” bomb was discovered. And in 2016, 20,000 people had to be removed from the area in Cologne after a one-ton bomb was found by construction workers.

More recently, Ahlbach residents (just on the north of Frankfurt) were jolted awake at 4 in the morning after hearing a blast and experiencing tremors. It was even registered as a magnitude-1.7 earthquake. And it was apparently devastating enough to leave behind a crater in a cornfield. According to the authorities, they measured the hole at 33 feet wide and 13 feet deep.

Initially, officers were skeptical whether it was a WW2 bomb recent findings by experts confirmed it as a 250-kilogram dud dropped by the Allied forces during the war. What triggered the explosion was a chemical long-term detonator. According to city spokesman Johannes Laubach:

“With the former railway depot, we were quite a bomb target at the end of the Second World War. e can be glad that the farmer was not in the field.”

As mentioned earlier, this is not uncommon in Germany. There are still thousands of dangerous ordnance under the ground. In fact, prior to construction, the area must be checked thoroughly for any bombs. Bombs would often go undetected for decades because they buried themselves in the soft soil.